Here we start with some video demonstrations about how to use features and functionalities of Blixt Wallet in real situations. Credits also to @colbitcoin and @Rager Major for these great demo videos.

How to use Dunder LSP to open channels and receive funds over LN?

What is a Dunder channel?

Dunder is a Lightning Service Provider for the Bitcoin Lightning Network. It currently supports "on demand channel openings", meaning if a Lightning wallet gets an inbound payment while not having any inbound capacity, Dunder will open a channel to the wallet with push amount equal to the inbound payment minus the on-chain fee.

A technique to allow incoming payments when the wallet has no inbound channels is to have an intermediary node (LSP):

To do this the wallet can create an invoice with a routehint that leads to a LSP node with a fake short channel id.

Once the LSP sees an incoming HTLC with forwarding information specifying said fake short channel id, it can proceed with the protocol specified above.

PROCEDURE TO OPEN A DUNDER CHANNEL:

How to use autopilot for opening LN channels?

Blixt wallet have the auto-pilot feature, but is used only once, first time you create the Blixt node wallet and you deposit to onchain QR code that appear first time on the main screen. That deposit will open a channel for you with Blixt public node, with the amount you deposited (minus the miner fees and reserves for the channel).

By default the autopilot option is already activated, but if you do not want to use it, just go to Settings - "automatically open channels" and disable the box.

This feature, is not used anymore, once the first channel is open. For the next channels to open you will have to use Dunder LSP channels and / or standard method for opening channels with any other LN node. You can check on LN nodes explorer page Amboss.space and choose a LN node that you whish to connect.

How do I open a channel with my Umbrel / myNode / Raspiblitz / other node?

There are 2 options: opening from Blixt towards your node and also from your home node towards your Blixt node.

But first let's mention some aspects to be taken in consideration:

Opening a channel from Blixt towards your home node

Opening a channel from my home node towards Blixt mobile node

IMPORTANT NOTE: Until new Tor implementation in Blixt will be deplayed (work in progress) and also Tor v3 fro Neutrino in LND code will be released, consider this option as experimental.

How do I refill an existing LN channel from onchain addreess?

Apart from regular opening LN channels in Blixt, sometimes users want to just load up existing channels from onchain address. For the moment Blixt doesn't have an internal way to swap funds onchain to/from LN, but is considered for next releases.

So how we can do it?

Done! Now you have your sats directly into your Blixt LN channels. This is also a good way for privacy.

NOTE: you can also do the way around, taking out sats from LN channels into any onchain address, without closing the channels.

How to use Blixt with Tor - clearnet - VPN

Many users want to use Blixt Wallet as a "privacy" node wallet. And we respect and understand that.

But in some specific situations Tor network is not so reliable for such things, as a LN node have to be 100% well connected, to sync the graph network and communicate well with peers.

But let's see how Blixt is doing the communications:

Now, let's analyse some situations of usage with different networks:

So choose for yourself, in which situation you are and the trade-offs you are willing to have for each method.

"My Blixt is stuck in starting, when I have Tor activated. What can I do?".

Yes, sometimes, due to bad connection, bad ISP, bad Tor boostrapping, the service can be stuck.

First step: force close Blixt app, so all remaining intents to connect will be removed.

Second step: switch your device internet connection, from 4G to Wifi or vice-versa, find another mobile spot to get another IP.

As a merchant, you will need more inbound liquidity, receiving more payments than sending them. You need to have "more space" to receive sats.

With Blixt you will need to do some preparation steps to obtain that inbound liquidity.

The idea is to have a bunch of enough large channels (depending on your incoming traffic amount), receive payments into these large channels,. and end of day or week, when these channels are filled, you loop out like 90% of the balance into an onchain address, using a submarine swap service (see a detailed guide about swaps here).

For the moment Blixt do not offer a swap service "in-app", but is taken in consideration for future developments.

Use case scenario and steps to do:

How to use Blixt as companion for your home node?

Being a mobile wallet, Blixt Wallet have the advantage to be a spending wallet and also a ramp / gate for your "infrastructure spending strategy machine".

Your home node (Umbrel, myNode, RaspiBlitz etc) will be the "commercial bank", that will manage your larger amounts of funding, taking care of your routing, fees, privacy, liquidity etc.

Between your mobile Blixt and home node you will have private channels, known only by you, are not visible in the LN public graph or known by others. This aspect will give you more privacy for your regular txs but also a good traffic pipe, if you want to move funds from KYC sources, through swaps, into your HODL onchain wallets.

How do I send sats to onchain addresses?

Blixt Wallet is also a LN node. And for that is making a clear distinction between "onchain wallet" and "LN wallet". Other wallet applications are not using this distinction and users don't really understand what is going on "behind the scenes". Blixt is more transparent in this matter and is using as "onchain wallet" for opening/closing channels and concentrate more on usability on Lightning Network, more like a private mobile node for spending.

Nevertheless, users can still transact onchain anytime, as with any other regular onchain wallet. Blixt have the "onchain wallet" into a separate section in the app, more like a "mini-vault", from two perspectives:

So if you just want or you really need to do an onchain payment, just go to top drawer - onchain wallet and in there you have access to all functionalities of a regular onchain wallet.

On the other side, if you have sats only on LN wallet and you want/need to send to an onchain address, this operation require some steps to do.

We have users that receive more sats on LN then spend and their LN channels get filled up quickly (merchants, users that buy a lot through LN exchanges and simply "stackers" that just get more sats then spend).

There are few options for this operation LN --> onchain:

DONE! You just swap out your sats from LN into an onchain wallet. Go on, now you can receive more sats into your Blixt LN channels!

How to use Blixt as "Infrastructure Spending Machine" (ISM)?

"Infrastructure Spending Machine" is the method used to buy bitcoins from KYC exchanges and move them to your on-chain HODL wallets, passing through a series of "preparations" in such manner that is breaking the links to your KYC identity, for a better privacy.

Between your mobile Blixt and home node you will have private channels, known only by you, are not visible in the LN public graph or known by others. This aspect will give you more privacy for your regular txs but also a good traffic pipe, if you want to move funds from KYC sources, through swaps, into your HODL onchain wallets. 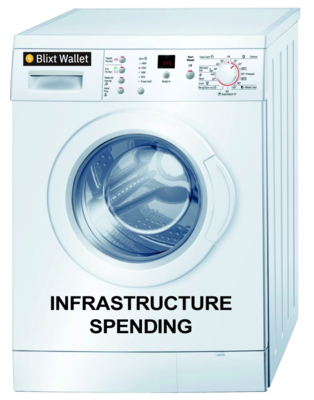 Here is a simple scheme to do swaps with Blixt, as example to use: 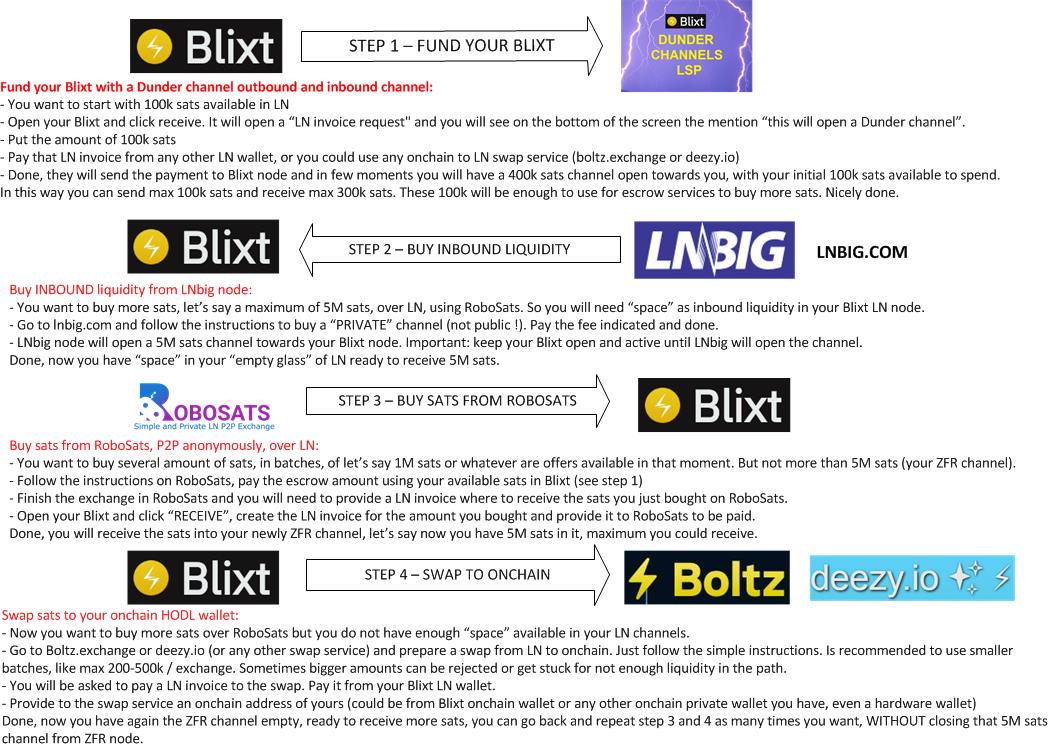 How to consolidate UTXOs from an old Blixt wallet?

Let's consider this use case scenario:

In this case, in order to have a smooth transition to the new device and also consolidate all those UTXOs, resulted from closing many channels, we recommend the following procedure:

"I have 6 Blixt Dunder channels open, with a total of 400k sats on my side. Sometimes I have route failures and can't make payments. I received from Robosats several orders and now all sats sits on 6 channels."

In order to have a good liquidity, not just for now, but also for future use, you should have max 3-4 ch, but with different peers, not just one. So let's consider that during a week, you need a max 2M sats TO RECEIVE, roughly. The amount can be adjusted by each user's needs and habits. Let's consider also that during the same week, you will make less payments, let's say roughly 300k sats. So each week will remain with a balance on his side of 1.7M sats, roughly.

Close all those 6 channels, are too small for regular need of inbound anyways. Dunder channels are mostly for new users, for easy onboarding with quick opening a LN channel. Are not for regular use to open one channel each time you have to receive. That is costly.

After all are closed and funds recovered in onchain, open 3 big channels, each one of 1M sats:

Done. Now you have 3M sats in 3 channels. All outbound liquidity. So let's make some space.

Use any of the convenient swaps (Deezy, Boltz, FixedFloat, Robosats etc) and swap, at least 50% of all your outbound liquidity.

You can do it in 3 batches (recommended for smaller amounts) or all at once (could fail because of other routing nodes low liquidity routes). You can try both cases.

If you need more inbound liquidity, swap out more sats, to your any other onchain address, using the swaps.

But do not close those channels. Not yet. A channel should be closed only when you do not have enough liquidity or peer is not responsive/offline too much time.

So now you have enough inbound liquidity to buy more from Robosats.

Buy more, swap out, make payments, happy Lightning. Repeat. Never close those channels. Use them back and forth.

Keep one channel open, one in which you have enough sats to buy an inbound channel from any LSP (LNBig, Bitrefill etc). All the rest, close them.

Once are closed, buy 2 big inbound channels from those LSP. Each one of 1-2M sats, enough to handle a large amount of payments. When you have them ready, you can go and buy more sats from Robosats.

Swap out to onchain using the swap services mentioned before and be happy, you made more space for buying more. Or just use those sats for making payments over LN.

When you have 2 or more different channels with different peers, yes is recommended to use the MPP (multi-path payment). But when you have just one channel or multiple channels with same peer, the MPP it doesn't work and could end up in "route failed".

So is always recommended to have channels with different peers / nodes and big enough to handle your regular transactions in a certain period of time.